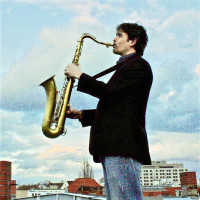 Fringe Jazz presents MARTIN KERN & JIM BLOMFIELD QUARTET at The BRISTOL MUSIC CLUB, 76 St Paul's Road, Clifton. Bristol BS8 1LP on Wednesday 14th December at 7PM. Tickets £16.
Martin Kern - Tenor Sax,
Jim Blomfield - Piano
Nick Kacal - Bass
Mark Whitlam - Drums
Doors Open 7pm
Performance Starts at 7.30pm
Debut performance at the club for the superb Swiss saxophonist Martin Kern and his new quartet headed up by Martin and one of our favourite pianists, the brilliant Jim Blomfield. On bass we have another first time visitor, the very talented Nick Kaçal who is best known on the London and Manchester jazz scenes and for his band Guerillasound. The quartet is completed by one of the Bristol scene's very finest drummers, Mark Whitlam.
MARTIN KERN grew up in Bülach near Zürich in Switzerland and first started to play classical cello, then later at age 17 picked up the saxophone. He studied in Paris at the CIM and at the Swiss Jazz School in Bern before spending some time in New York. He then moved to Berlin where he became a part oft he vibrant jazz scene. It was there that he recorded his first albums as a bandleader, "Visions" and "Now Is The Music". In Vienna he recorded his most recent CD "Live At The ORF", a live radio concert at the Austrian Broadcasting Corporation. Martin's music is a striking blend of bebop, hard bop and contemporary jazz, his sound reflecting those of legendary saxophonists Sonny Rollins, Dexter Gordon and others.
JIM BLOMFIELD is of course one of the mainstays of Bristol's jazz scene and has been a regular performer at Fringe Jazz over the clubs 10 year history performing with his own Trio, various Andy Hague projects including Silverado and at all the Three Tenors gigs with Andy Sheppard, Ben Waghorn, Jake McMurchie and Nick Dover. He has backed countless big name guest soloists and released two albums of his own music which blend jazz with electronica and contemporary music influences. He is also well known as one of the UK's finest salsa pianists and appears in many Latin ensembles, including recently guesting with the legendary Roberto Pla at London's Pizza Express.
Tickets are also available at TREBLEROCK Guitar Shop, 52 The Mall in Clifton Village.
FRINGE JAZZ, Wednesdays at 7PM at The BRISTOL MUSIC CLUB, 76 St Paul's Road, Clifton. Bristol BS8 1LP
Fringe Jazz at The Bristol Music Club is run in association with TREBLEROCK Guitar Shop