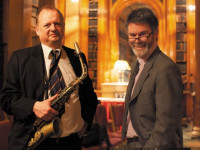 Fringe Jazz presents ALAN BARNES & DAVE NEWTON at The BRISTOL MUSIC CLUB, 76 St Paul's Road, Clifton. Bristol BS8 1LP on Wednesday 30th November at 7PM. Tickets £18
Alan Barnes - saxophones and clarinet    David Newton - piano
Doors Open 7pm
Performance Starts at 7.30pm
ALAN BARNES and DAVE NEWTON have been playing duets together for over 40 years. These multi award-winners cover a vast repertoire from Louis Armstrong to Chick Corea and play with an empathy that can only come with long experience. The emphasis, as always, is on swinging, accessibility and interplay. Expect a hugely entertaining programme of straight ahead jazz flawlessly played and interspersed with lots of anecdotes.
ALAN BARNES is a prolific international performer, composer, arranger, bandleader and touring soloist. He is best known for his work on clarinet, alto and baritone sax, where he combines a formidable virtuosity with a musical expression and collaborative spirit that have few peers. His range and brilliance have made him a "first call" for studio and live work since his precocious arrival on the scene more than thirty years ago.
His recorded catalogue is immense. He has made over thirty albums as leader and co-leader alone, and the list of his session and side-man work includes Bjork, Bryan Ferry, Michel LeGrande, Clare Teale, Westlife, Jools Holland, Tommy Chase and Jamie Cullum. He has toured and played residencies with such diverse and demanding figures as Ruby Braff, Freddie Hubbard, Scott Hamilton, Warren Vache, Ken Peplowski, Harry Allen and Conte Candoli.

In British jazz, Alan was recognized - and hired - by the established greats of the time: Stan Tracy, John Dankworth, Kenny Baker, Bob Wilber, and Humphrey Lyttelton. But he is equally respected for his longstanding and fruitful collaborations with contemporaries such as David Newton, Bruce Adams, and Martin Taylor. Alan's unique musicianship, indefatigable touring, and warm rapport with audiences have made him uniquely popular in British jazz. He has been the recipient of countless British Jazz Awards and has twice been made BBC Jazz Musician of the Year.

DAVE NEWTON has been on the jazz scene in excess of 30 years and in that time has gained an international reputation as a highly original, engaging artist with an instinctive rhythmic and melodic feel for jazz which has made him not only popular with his peers and audiences but also amongst vocalists as their favoured accompanist. Those have included Carol Kidd, Marion Montgomery, Tina May, Annie Ross, Claire Martin, and Stacey Kent with whom he toured all over the world for ten years and accompanied her on the journey from student to a highly successful international artist.
Dave's early childhood influences of Peterson, Garner and Tatum are clearly evident in his playing today. He has an ability to truly improvise and arrange on the spot, taking his listeners on a vivid musical journey utilizing his overriding melodic sense and infectious feel. A graduate of Leeds College of Music he moved to London in the early eighties quickly teaming up with jazz guitarist Martin Taylor, and saxophonists Don Weller and Alan Barnes, and touring with Buddy De Franco. Voted "Best Jazz Pianist" in the British Jazz Awards at least 14 times, his music can also be heard on many television productions, especially in the US where over twenty TV films benefit from his haunting themes.
Tickets are also available at TREBLEROCK Guitar Shop, 52 The Mall in Clifton Village.
FRINGE JAZZ, Wednesdays at 7PM at The BRISTOL MUSIC CLUB, 76 St Paul's Road, Clifton. Bristol BS8 1LP
Fringe Jazz at The Bristol Music Club is run in association with TREBLEROCK Guitar Shop